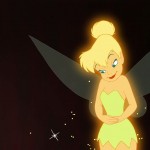 I’m new to the Walking Dead show, though I read the comics years ago. I binge-watched as much as I could the last two weeks so I could enjoy last night’s mid-season premiere. The show is excellent (though highly depressing and gory – much like my beloved Game of Thrones) and watching  Carl rediscover some of the pudding-and-books delights of suburban living, made me realize A) I would never survive the zombie-world order without some Pantene and running water and B) Why is it ALWAYS Zombies? What if madcap fairies brought about the end of civilization?

I’d much prefer a show where every time a fairy kissed you (because, face it – they aren’t biters) you became a magical fairy and proceeded to magically start shrinking, living in adorable mushroom cottages and flew around trying to kiss everyone.

Sure, the NFL would have to change some rules to allow mid-air tackles, and the NRA would be using newly-winged fairies as target practice. Eventually, though, the fairies would start outnumbering humans and while there might not be any more factories churning out Pantene, my hope is all the magic dust would keep my hair moisturized and shiny.

Of course, we’d have a rag-tag band of gritty human adventurers around – constantly staving off the kiss of the fairies, avoiding all magic and trying desperately to get the world back to the way it used to be, with proper, manufactured hair conditioner and not editing run-on sentences. It wouldn’t have nearly the hacked-up skulls that Walking Dead has, but it would have kissing, people! Magic dust and wings! The 13-year-old girl in me is totes excited by the possibility!

You’re welcome, Hollywood! I’ll take 10% off the back-end for all licensing and merchandising of my new hit show idea!