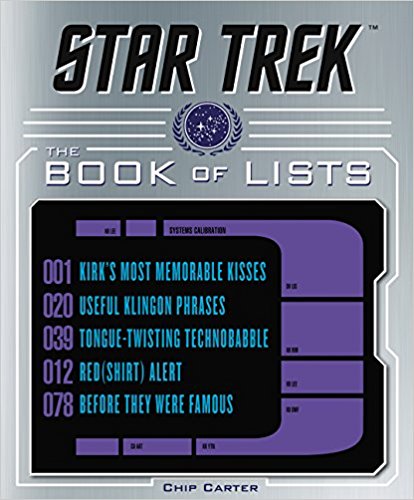 After a year of work (well, a couple of months of crazy late nights, a lifetime of obsessive fandom and many many calls to my editor), Star Trek The Book of Lists came out in November. I’ve been swamped with other projects and the holidays, but I would be remiss to not do a little self-promotion, no matter how late. Thus, with no further ado … The Top Ten Reasons to Buy My New Book.

8. I put as much Tuvix in there as the Publishing Gods would allow.

7. It was a fun trip down memory lane – especially for the shows that were filming during the time I worked on the stdio lot.

6. I never managed to throw in my favorite detail … the set designers used silver-painted Legos in some of the Borg regeneration alcoves. Still, there’s some other good details in there.

5. It has a picture of President Obama and Nichelle Nichols. Worth the price of admission right there.

4. I added a lot of things from The Animated Series into the lists – THIS DOES NOT GET ENOUGH LOVE!

3. If millions buy it, surely they will have to revise it in a few years and add Star Trek Discovery!

2. I want to do a whole bunch more of these.