Need some indestructible rubbers? I mean, rubber? Wonder Woman and Steve travel to Buenos Aires to help safely bring the formula for … BWAH HA HA! Why rubber? What on earth makes rubber the material that needs to be super strong? Is it for indestructible birth control?

We open at a testing ground with the first of 1,000 captions. This episode has some MAJOR caption-fu. The army is testing its indestructible rubber tires. Somehow tanks that have tires that can’t be destroyed is key to winning the war effort. I am not the military strategist that Steve and General Blankenship are, so I have to just give them this one.

Blankenship is sending Steve to Argentina to pick up the formula (Formula 407, if you didn’t clue in from the title –  and it seems FAR too close to the cleaning spray’s #, but we have to just let this slide as well). Since Diana is fluent in Spanish, she gets to go, too.

We caption over to the picturesque county of Argentina. Professor Moreno and his assistant Maria discuss that A) the professor never stops testing his rubber formula and B) he’s ready to give it to the Americans. Maria is convinced he will win lots of awards after this nasty war is over and Moreno says after the Americans leave, he’s taking his daughter Lydia on vacation, and Maria should come.

There is some small discussion on Argentina being a neutral country. This is important as we go along.

We switch to some Nazis in Germany, who are planning to steal the formula and blame it on Argentinian Nazi sympathizers. Again, I am not versed on Argentine politics during WWII, other than what I saw in Evita, so we will move on. The Nazis also point out that Germany’s … rubber supply … has been cut off –  BWAH HA HA HA HA  this episode —  I can’t, I just can’t!

But, with steel-strong rubbers (hee hee hee) their tanks will roll through London.

At the War Department, Diana has some Unfortunate Neckwear for a change. Etta is jealous that she will be alone with that dreamy Steve Trevor under the big South American moon. Diana kills the mood, saying the moon is the same size everywhere. LITERAL HUMOR!

Etta tries to entice Diana with her talk of “hot-blooded gauchos,” but this goes nowhere.

Steve and Diana land in Buenos Aires and meet the Ambassador. They discuss that there are a lot of Nazi agents, provocateurs and spies in town. Steve jokes that they all work in an import/export company in Sweden. OLD TOPICAL HUMOR!

Some of those agents, provocateurs and spies are at the beach (that does NOT look at all like the Pacific Coast Highway, it’s Argentina, dammit) , waiting for the chance to ambush Steve and Diana. Hans, in particular, is impatient and wishes they were German like them so they would be on time. OLD STEREOTYPE JOKE!

They do in fact, ambush the car and the driver is knocked out. Steve and the ambassador are walked out to the beach and guns are POINTED! The Nazis left Diana in the car for reasons.

About ten minutes later, long enough for Diana to do a Transformation Twirl® into Wonder Woman, the Nazi agents, provocateurs and spies are still training their guns on Steve and the Ambassador. So Wonder Woman leaps in, beats them up and then LETS THEM ESCAPE. When Steve says she’s like the calvary, she doesn’t get the reference (she’s still working through that book on American Slang, I reckon) and Steve says one Saturday he’ll take her to the movies.

He asks where Diana is and Wondy says his VERY capable assistant is taking care of the driver.  HUMOR! They invite Wonder Woman to a party at Professor Moreno’s. They don’t expect trouble, which, why would they as the professor who created a super-hard rubber formula (snicker) is throwing a party in neutral but filled-with-Nazi-agents-provocateurs-and-spies-Buenos Aires to celebrate his giving the formula to the Americans? HOW COULD THERE BE TROUBLE?

This is the worst kind of social climbing, Steve. Wondy says maybe, she wants to sightsee, so there.

We caption to Moreno’s house. Being an Argentine scientist really pays … this house is nice. The ambassador is inconsequential and we meet two more minor characters … Lydia, the professor’s daughter, who quickly makes a move on Steve. There’s DEFINITELY an age difference there.

Meanwhile, Diana, in a pretty sweet powder-blue number, is harassed by Antonio. He’s a creep but is actually played in some Mexican lucha libra films, so I’m going to pretend his creepy demeanor is a secret identity thing and he will bust out his luchadore mask and help Wonder Woman later.

Moreno says he will be losing Maria soon, to her fiancée .. and it’s the evil Major Keller … one of the Nazi agents, provocateurs and spies  … in fact the HEAD Nazi agent, provocateur and spy! Now we can guess that Maria is helping or otherwise assisting her fiancée … and the formula is in trouble!

Antonio is relentless with Diana, and I don’t know why she doesn’t jerk a knot in his head. HE goes on and on about how pretty she’d be without glasses. RUDE. She says she’d also be very near-sighted.  Maria chats with her spy fiancée, and he promises no one will get hurt — so she is IN ON IT! But only a little, so she can still be good at the end of the episode.

Keller goes out for a smoke and his henchmen almost jump him, not realizing he is their head Nazi agent, provocateur and spy. He’s pleased with their diligence. They say all exits are covered.

As Lydia and Steve smooch under the exactly-the-same-size-as-North-America’s moon, they are jumped. Luckily, these Nazi agents, provocateurs and spies are so slow and lame, Diana is able to tell Antonio the WAV manual has instructions for dealing with mashers, send him for champagne, change into Wonder Woman and make it to Steve in time to throw two of them in the pool. However, she gets choloroformed , so she and Steve are taken prisoner.

So the next morning (yes, we caption right on into the next day), the Professor is working happily in his lab. Seems he left early to retest the formula AGAIN. Maria says everybody left, knowing full well Wonder Woman and Steve are in the wine cellar.

Steve wakes first and nudges Wondy awake. She says the choloroform tastes awful. Of course, they left her bracelets, belt and lasso, so she easily busts out of her ropes and frees Steve.   Steve has a cute idea to create a distraction to get the guard into the cellar. He tries to knock a huge shelf unit down, but he can’t budge it, so he waits for Wonder Woman to do it.

Keller tells Moreno what’s up –  either he gives the Nazis the formula AND makes a fake one for the Americans, he’ll kill Lydia, who is NOT tied up in the wine cellar with Wonder Woman and Steve.

The fake formula is key … foe the Fatherland must let America waste time while they construct inferior … rubbers … BWAH HA HA HA whoever wrote this episode had a good time! Maria is shocked … how could her fiancée/Nazi agents, provocateur and spy be so EVIL? Truly, inferior rubbers ARE a device of Satan!

Morena has one hour to make an inferior rubber formula (Formula … 408?). Steve and Wonder Woman search the house, but Wonder Woman states Lydia is too valuable and Steve clues in … they’ll use her to get the professor to do their bidding. Steve is not too bright at times.

Moreno says he’s not strong enough to resist the Nazi agents, provocateurs and spies, since they have his daughter. Steve tries to convince him, and Wonder Woman looks for Maria, knowing a good woman-to-woman talk will fix everything.

The Nazi agents, provocateurs and spies are at the beach … Dietrich has to be the one to “take care” of Lydia. Why does he have to be the murderer? Wonder Woman grapples with Maria’s feelings of betrayal, Steve grapples with Moreno’s fear of losing his daughter, and I’m grappling with fast-forwarding through the rest of this.

Steve suggest Moreno give Keller the false formula. He’ll follow Keller and save Lydia. This, of course, doesn’t work. Keller says High Command picked him for this gig because he used to be a research assistant on a project just like this! He can tell fake formulas from real ones.

So … is this how he met Maria? At a Disgruntled Indestructible Rubber Project Research Assistant Convention?

Moreno gives Keller the formula and Steve tries to fight Keller, but causes an explosion and gets caught … again. He still has his cummerbund from last night on, so perhaps it is inhibiting his movements.

Wonder Woman hears the explosions and goes to investigate. She tells Maria not to come, but she does anyway. Good thing –  she distracts the Nazi agents, provocateurs and spies as they shoot at her. Wonder Woman lassos the guy and finds out where they aare. She LEAVES THE LASSO with Maria. She is too careless with that thing!

It’s funny how 1942 Argentinian streetlamps look just like the ones in 1970s California. Wonder Woman saves Lydia and bends a gun, which is what we need in 2020. Wonder Woman races to the beach to save Steve. Her appearance distracts Keller and Steve knocks him to the ground … even as Nazi agents, provocateurs and spies in wetsuits charge out of the water!

They toss pipe bomb after pipe bomb at Wonder Woman, and she easily catches them and tosses them into a cove. Yet they KEEP THROWING THEM AT HER.  Finally out of bombs, they dive back into the water. Wonder Woman follows, but hasn’t Twirled up her blue diving suit yet, so is unable to follow them.

Steve says, “What took you so long?” and we all laugh.

Back at the War Department, Etta is excited by Diana’s postcard to her. It sounds exciting with all that normal-sized moonlight. Etta reminds her next time, Antonio will be waiting. Then, when Steve comes in, Etta suggests Lydia will be waiting for Steve. Steve takes no sass from assistants and tells her to go tell General Blankenship something, but then smiles. Great leadership, Steve.

Steve does wonder … how does Wonder Woman always know when he needs her? Diana says maybe it’s … (wait for it …) female intuition.

Oh, this show, sometimes! 2. 5 magic lassos out of five. Anyway, next week … Roy Rogers guest stars! Saddle up, pardners! See you then! 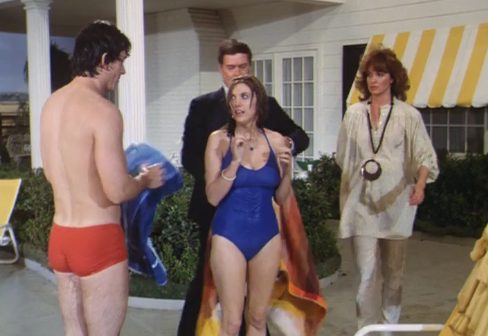 Oh, yes … The SECOND Kristin Shepherd is here and she’s got her sights on another Ewing … and it ain’t Lucy […] 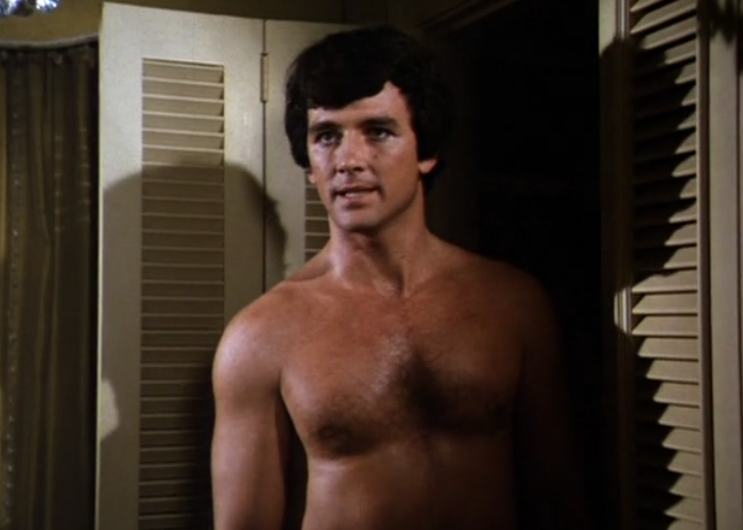 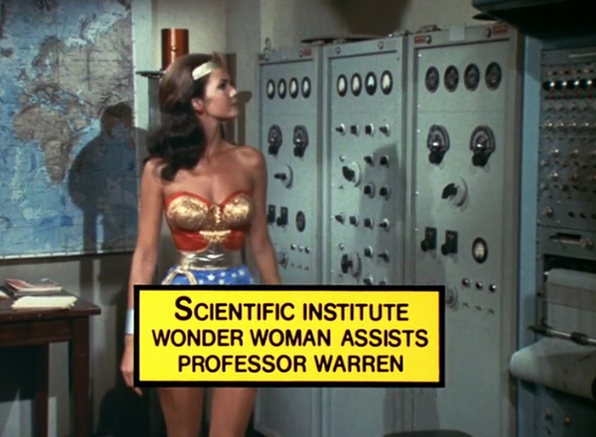 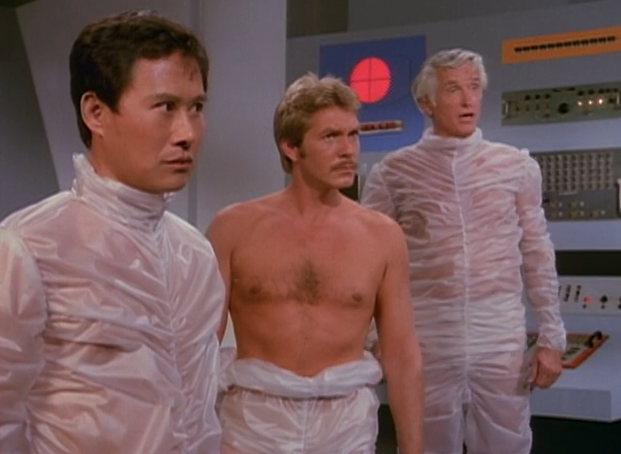 PEW PEW PEW! Time for a moral dilemma for our runners and another episode without Francis! Where IS he? Let’s search for […]