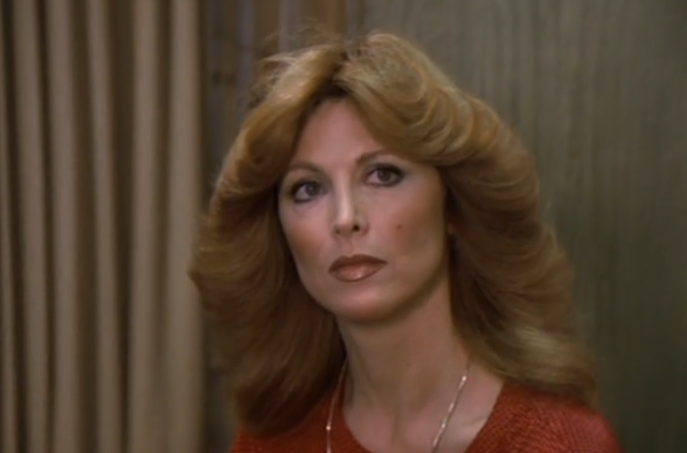 After the disco glory and school learnin’ that was last week’s episode, this week we get back to some grown-up wheelin’ and dealin’ … and we find out what’s in at least ONE of the Red Files!

Bobby’s office is under extremely noisy construction. I feel like this building has to be big enough to give him another office while they work on this one, or he could work at home. We learn from Ginger that J.R.’s usual choice of lunch is roast beef on rye.

Bobby heads home to finish work and J.R. reminds him the Red Files shouldn’t leave the office. Bobby says they have to – Daddy needs some tallies by tonight. It feels like the writers had never worked in an office setting to come up with some “tallies” as the plot device. From my count, Ewing Oil only ever had five employees in its corporate office at any one time – J.R., Bobby, their secretaries and sometimes Jock. Could they not afford people to work on accounting, or logistics or HR?

On second thought, J.R. is clearly an HR nightmare, so its probably better they didn’t have anyone on the payroll trying to come up with fun employee events or discuss enrolling in 401Ks.

Ginger and Bobby head out together. They’re very chummy, her arm in his. Bobby says J.R. should have married Ginger. NO, Bobby! She should have married the Professor. There were always sparks.  As soon as Bobby heads away, Cliff Barnes pounces on Ginger, wanting her to spill beans on the Ewings. She resists but takes his phone number.

If playing cards and judging others by the manliness of their drinks in the afternoon (Orloff likes bourbon, straight) is what these oilmen consider work, I want Jock’s job.

They discuss Cliff’s vendetta against the Ewings. When Bobby gets there, Jock explains to him in private he’s not going to call in Orloff’s markers. This is an olds’ way of saying Jock isn’t going to make Orloff pay his debts.

Later, Bobby is eating some food in his room, reading the Red Files and ignoring Pam for over two hours. She wants to take him to school (see last episode’s recap for what that metaphor means) and in doing so, he lays the Red File on the rounded edge of the sofa where it FALLS BEHIND IT. This will be important later.

Miss Ellie, Sue Ellen and Lucy get back from a shopping trip. Lucy tries to be snarky and isn’t good at it. Either it’s the editing or directing, but the conversation seems to lag and no one is responding in what a normal time frame would be.

In the first season, the married couples had houses on property then they all lived in rooms of the main house itself. I am not the son of a wealthy cattle or oil baron, but I would have stuck with a house and not live with my spouse in the ROOM I GREW UP IN.

J.R. immediately heads for somewhere else and we see it from a crazy overhead angle – to keep us from guessing it’s Ginger? But of course, it’s her. She tries to send J.R. back to Sue Ellen, but he’s firmly entrenched in the Madonna/Whore complex of who a Southern gentleman marries and fucks. Ginger even explains she only knows what he likes sexually because he taught her, implying he could just teach Sue Ellen whatever kinks he has. But no, that’s not the J.R. Way.

We always know J.R. is an asshole, but when Ginger cries about having breakfast alone every morning and he STILL forces himself on her, really makes this recap far more distasteful than I thought it would be. I love to hate J.R. … but this is just monstrous.

Afterwards, Ginger reveals her birthday was two days ago and J.R. leaves her a hundred. This is all more awful than I remember and she almost immediately calls Cliff Barnes, which for the only time I can ever remember, feels like a good idea.

Next day, after another lonely breakfast, Ginger is serving coffee in Jock’s office when Bobby realizes a Red File, with details on Orloff’s second trust deed that the Ewings paid for, is at the ranch. Bobby calls Pam to bring it and … you know what’s coming.

Pam finds it, brings it in and hands it to Ginger while she waits for Bobby.  Lickety-split, Ginger is at Cliff’s house and she stays with him all night. Presumably, she gets breakfast out of the deal. He at least gets her coffee the next morning.

Before you can say “What kind of slow news day is it on local television?” Cliff is on TV with the deed. Ginger is angry, as she thought he was only going to show it to Orloff to scare him. J.R. accuses Pam of being a spy in the house at dinner – completely ignoring Miss Ellie’s rule that we don’t talk about business while supper’s on the table. Though it may be breakfast? Hard to tell.  Perhaps business talk is allowed at breakfast.

Reactions are varied. Pam doesn’t defend herself. Miss Ellie looks off into space near Pam. Jock wipes his mouth with a napkin. Sue Ellen sips coffee. Lucy has no words to act with, so sits blondely. Bobby doesn’t say anything until Pam storms off from dinner.

Bobby asks why no one stood up for her. Pot-kettle, Bobby? They pack up and leave Southfork (#1 in a set of eight-million – collect them all!). Pam asks Cliff how he got the document, since she’s being suspected of it. He says she knew what she was getting into when she married Bobby. Harsh, Cliff. Ginger is pissed that the document is public.

Bobby has to break it Orloff that he’s gonna have to resign, but they’ll float him a loan on the house. No more ElectroComp money for you, Senator! At a hotel, Pam realizes Ginger is Suspect Number One.  At the office next morning, Pam shows Bobby Ginger has Cliff’s week-old unlisted number – and that Ginger is there.

She heads to Cliff’s to talk to Ginger. Ginger gets ready to leave Cliff’s but when Cliff hears Orloff has resigned, he’s pissed that Orloff took the fall for the Ewings. Ginger finally realizes Cliff was using her as much as J.R. was – only he’s not QUITE as much of a dick.

Pam accosts Ginger and wants her to come clean. Pam’s a bitch, flaunting that she married a Ewing and since Ginger never stood her ground, she has nothing. I have never been #TeamPam, but this is repugnant behavior.

J.R. laughs at Bobby’s assertion Ginger might have taken the file. Bobby almost threatens to blackmail J.R. over his cheatin’ ways, but says he’s not going to blow the whistle on him – because he “won’t do what you already did to me, brother.” Bobby storms out dramatically as Ginger storms in dramatically.

Pam walks in and Bobby somehow appears after leaving J.R.’s office. Ginger wishes everybody a very Southern eff you. Go back to the Island, Ginger!  Back at the ranch, Bobby complains no one stood up for Pam. Lucy is the only honest one who says they all thought Pam stole the file. Inexplicably, everyone laughs.

Lucy then pushes J.R. to apologize and kiss Pam.

Capice Moment – J.R. and Pam stare at each other after the apology kiss. Sue Ellen does not look happy.

See you with the Red Files next week!