SouthFork is in danger … and this time it’s Miss Ellie who’s ready to give away the ranch! How can it be? Let’s head out to the swimming pool and enjoy this week’s Retro Recap of Dallas!

Sue Ellen and Miss Ellie are picking out a room to be the nursery. This feels premature, since Sue Ellen looks about as pregnant as I did before I was sheltered in place and diet exclusively on nacho chips and ice cream. Still, eventually they will have to stick a pillow under her blouse.

Miss Ellie remarks that J.R. was shy as a child. J.R. comes in solely to let them know he can’t meet them for lunch, he is speaking about his business success at the chamber of commerce. When Sue Ellen says he’s not shy anymore, Miss Ellie pats Sue Ellen’s stomach and says … “Obviously.”

Sue Ellen and I both reply with an incredulous “MISS ELLIE!”

In a Dallas hotel room, someone named Garrison and his much-younger companion, Kathy, receive a painting Garrison commissioned. He gets pissed and Kathy calms him down. It’s a pretty tacky painting of an old farm, so I’m with Garrison on this.

Garrison wants to mail it to Ellie and Kathy stares him down until he agrees to personally take it to her.

Jock is at the pool reading the newspaper when Ray drives up in the HIDEOUS Native American-appropriated jacket from Season One. I felt sure someone in wardrobe would have burned that thing.  He tells Jock one of the hands saw an oil tanker on Section 40 a few weeks ago.

Now. I give this show a lot of grief and the characterizations can veer wildly from week to week depending on the writer. But dammit, they have a hard line on continuity!  We know it’s from J.R. and his pals testing the wells, but Jock wonders if it wasn’t him and Bobby two weeks ago looking at building a shopping mall on the land.

Bobby is inside on the phone and the doorbell rings. He yells for Raoul to get the door, but Raoul is nowhere to be found. Bobby Ewing has to open his own door. The indignity of it all. It’s Garrison with the painting.

Garrison asks for Ellie, but of course, she’s out nursery shopping with Sue Ellen. Garrison figures out Bobby is Jock’s son, but declines to say why he doesn’t like Jock while talking smack about him. Garrison storms out, angry and Kathy explains to Bobby this visit is important to Garrison.

Sue Ellen babbles on about wallpaper color and slips away from Miss Ellie to call Cliff. She wants to share the joy of picking out baby furniture with the baby daddy, but Cliff tells her he can’t take calls like this anymore. This is one of the few times I actually feel for Cliff.

Ray and Jock head to Section 40 to look for clues. I find it hard to believe they’ll find anything after all this time, but they do! A puddle of crude has them pry open the capped well and they see scuffmarks on the well head.

At the obligatory drinks before dinner, Jock questions J.R. and Bobby as to what might have caused the damage to the well head. J.R. equivocates and promises to check on it.  The womenfolk come in and Bobby shows Miss Ellie the painting.

She is surprised, it’s the original SouthFork ranch. Right on cue, the doorbell rings and NOW Raoul shows up. Garrison comes in and it’s a beautiful moment as Miss Ellie goes from shock to disbelief to anger to happiness in minutes. Garrison explains that he ran away years ago to avoid his daddy’s disapproval. He pretended to die in a shipwreck and has been in Europe for 40 years, afraid to face Ellie again.

He was also friends with Digger Barnes, which is why he never liked Jock. He’s pleased to meet Pam, but no one introduces Sue Ellen or Lucy.  J.R. tries to sniff out why Garrison has come back. A whole episode worth of needless intrigue and suspicion could be avoided if Garrison just told them the truth, but he obfuscates. He calls Kathy his “good friend” and J.R. pounces on that.

Garrison refuses to stay the night, which feels rude. 40 years and he can only stay literally three minutes. Lucy wonders if her daddy was named after Garrison and Jock and J.R. wonder what Garrison’s real motives are.

Next morning Bobby comes out of the shower in the most garish towel I’ve ever seen. I guess the lack of Unfortunate Neckwear in this episode called for Unfortunate Linens. The scene is only memorable for its Bobby Ewing shirtlessness and its hideous toweling.

Next day, J.R. gets ready for work and Sue Ellen says she is not having some relative Miss Ellie’s take SouthFork away from her baby.  On his way to work, J.R. stops by to see Ray and tries to intimidate him into not telling Jock things like “Hey, we’ve seen J.R.’s thuggy friends testing oil wells that are forbidden on SouthFork land.” This goes over well with Ray.

While playing backgammon, Miss Ellie tells Jock she regretted having to declare Garrison dead all those years ago. Jock’s a bit tired of all of it and says he’s going to the club for lunch. When she asks him why he never like Garrison, Jock says it’s the other way around.  He also adds he’s seen a lot of men “sniffing for something that don’t belong to ‘em.” OUCH!

J.R. scolds his two buddies for being sloppy with the oil cap business and he doesn’t want any more loose ends. Meanwhile, Ray heads to a bar. Not to get drunk, but to see an old buddy. His friend asks what a cowboy is doing in a roughneck bar.

Now. Being neither a cowboy nor a roughneck, I wonder if this was really some sort of thing in Texas. I guess it could be, but given that as long as Ray isn’t wearing that hideous coat and all the roughnecks are also wearing cowboy hats in the bar … how would anyone know Ray was a cowboy?

In any event, Ray wants information about any roughnecks on SouthFork. I’m now regretting there was no spin-off, Ray Krebs, Roughneck P.I.

At lunch, Miss Ellie tells Garrison about Gary, which, you know, no one thought to call him and tell him his dead uncle was alive? That evening, Miss Ellie calls all the men together  — because the womenfolk have no say in this?

She wants to give the ranch back to Garrison, and feels that it’s the right thing to do, even though it hurt her all those years ago that her daddy left it to Garrison and not her because of 1930s sexism.

This sets off fireworks between her and Jock. It’s a pretty nasty fight and Jock’s ugly “head of this household” attitude is completely out of the 1930s-1970s. Let’s not forget the land IS Miss Ellie’s, people! I think they don’t have dinner as a family together that night.

Bobby and Pam sit at the pool and discuss things, which is a scene only memorable for its Bobby Ewing shirtlessness.

J.R., of course, has a private investigator checking up on Garrison. It’s never the same P.I., and now I think it was a truly wasted opportunity not to have Ray Krebs, Roughneck P.I. as its own show!

Miss Ellie has Garrison and Kathy over for lunch. J.R. tells Kathy he’ll show her around a real Texas ranch. He quickly accuses her of golddigging and she stalks off. When she gets back to the patio (because no one thought to go inside or sit down at the table) Garrison figures out what happened and gets pissed.

J.R. challenges Garrison, asking how an old man could get a pretty young thing like Kathy to marry him if not without money — and that’s why he came to get SouthFork. Garrison is riled up and gives a great line –  “You trained this one well, Jock. He opens his mouth and I can almost see dollar signs rolling out.”   J.R. promises a fight for SouthFork through every court in this country, which, I’m not sure that’s feasible or desirable through our current judicial system. The Notorious R.B.G. doesn’t care about your family issues, J.R., and I don’t think Judge Judy would, either.

Garrison likes the challenges and tells him to bring it on. They leave and Miss Ellie is PISSED at J.R. and yells at him. CRIKEY!

So, of course, it’s up to Bobby and Pam to fix things. They knock on Garrison’s hotel suite door. Garrison’s asleep but Kathy lets them in. She explains he’s in the anger stage and she shouldn’t have reacted unprofessionally with J.R. She says she’s not Garrison’s lover, but his nurse.

Then, in a complete violation of HIPAA and patient confidentiality and Garrison’s express wishes to her to not say anything … Kathy tells them that he’s going through all the stages (which were probably not as well know in the 1970s) of grief before death.

Bobby and Pam lay in bed and discuss things, which is a scene only memorable for its Bobby Ewing shirtlessness. At least the producers knew their audience.

J.R. gets word Garrisons has withdrawn all his funds from a European bank in the last month, which allows Sue Ellen to slide in some snark about most mistresses having expensive tastes. Mee-OUCH!

Bobby heads outdoors to the patio table, where Miss Ellie says he’s the only one in the family who will still talk to her. He spills the beans, so of course, Miss Ellie heads to Garrison’s hotel.

Garry is angry at Kathy during breakfast, and then there’s a knock at the door. Miss Ellie comes in and she and Garrison have an extremely sweet talk where he admits everything.

Ray Krebs, Roughneck P.I., is at the roughneck bar playing pool, when his buddy comes in to let him know a roughneck named Charlie Waters might talk to him. We instantly cut to J.R.’s office, where Louella says a Charlie Waters is waiting to talk to J.R.

Charlie comes in and he is dirty and HOT! Now I want to be a Roughneck P.I.! Charlie knew he should come to J.R. and J.R. offers him a drink and says it will be worth his while.

Miss Ellie calls the family together. Once everyone gets together, she lets them know Garrison is moving in and that he wants to die at home. Jock apologizes and Miss Ellie says she’s not even angry anymore. Garrison wants no fuss and no tears while he’s there.

Capiche Moment: The next day, Garrison and Ellie walk around the stables. He’s happy to be home and he shouts that out as they stand by the fence.

Such a sweet episode! I loved it and it’s a shame we didn’t see more of him! Plus, shouldn’t SOMEONE have called Gary?

A four out of five Sue Ellen cocktails for this one. Next week … Sue Ellen and her friends catch J.R. out with another woman, and J.R. finds out about Sue Ellen’s affair with Cliff! Join us as the sparks fly next week! 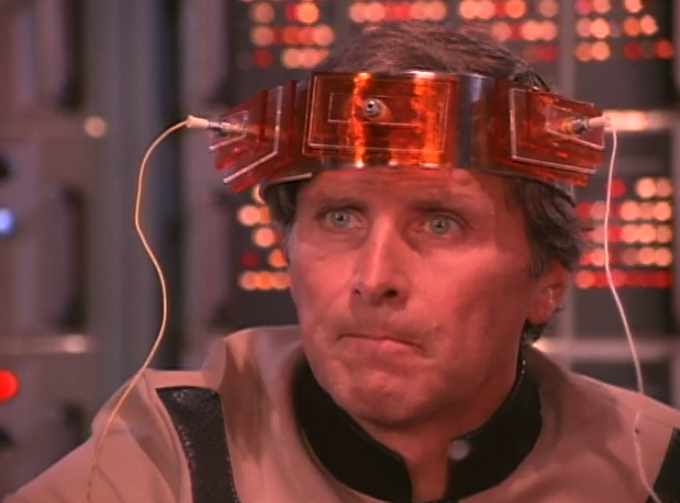 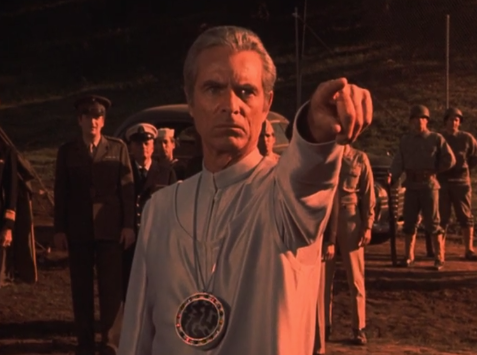 Whoo hoo! I love an alien-testing-Earth scenario and here’s one of my faves! Watch as Andros visits Earth and Wonder Woman has […] 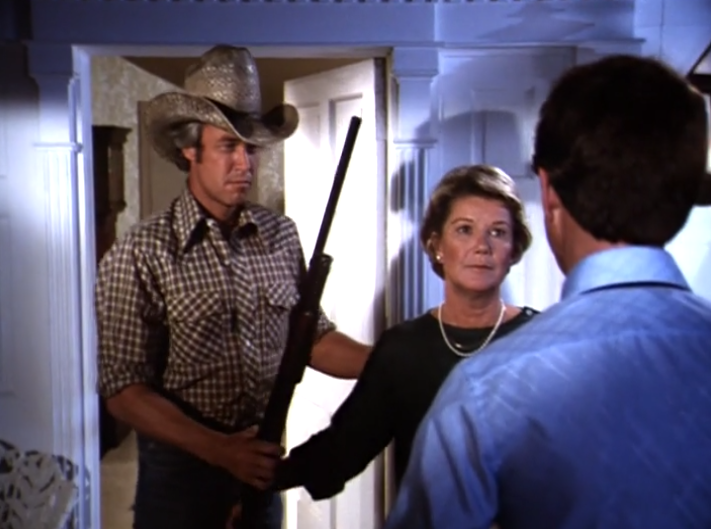 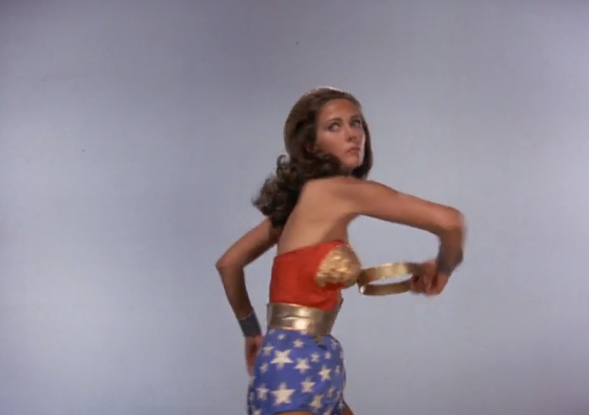