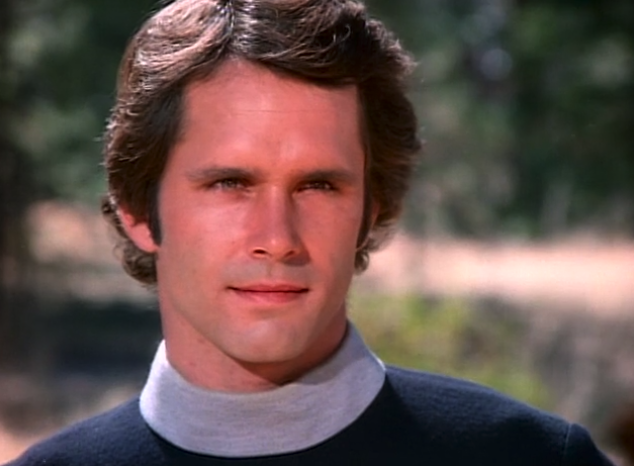 This week, we dive right into the action. After we have a false biology lesson from REM. Logan asks what type of insect (that the audience NEVER sees) is and REM calls it a grasshopper. Now, I get that on prime time 70s TV, they didn’t want to show a cockroach. But they don’t show anything. Yet, REM claims grasshoppers would survive when all other life in a holocaust would be wiped out  – but two things are wrong with this. He substitutes “grasshopper” for “cockroach” (which we all KNOW can survive anything) and the holocaust has ALREADY happened! Of course, some part of Southern California survived,  so this could episode could be filmed.

I don’t believe grasshoppers have that ability, so any entomologists, please correct me.

Anyway, suddenly Francis hops on a rock and shouts “RUNNER!” His cool freeze ray freezes Logan and Francis steals his gun and his helper (who gets a name – Benjamin –  I don’t know what happened to the other one … lost in the Mountain City?) will “dispose of REM.”

Greg Evigan is at some peak cuteness as he argues for REM’s life. If only he was showing more skin, he might have overpowered Francis by mere pheromones. They take the air car and REM is left behind with Benjamin guarding the android with a blaster. He explains to Benjamin that he is nuclear powered and a shot might kill Benjamin as well. REM suggests a tree might protect him. Clearly no one should take ANY scientific advice from this android.

REM ditches Benjamin, then the hapless Sandman falls into the rotting floor of an abandoned house. +1 for fake science, I guess?

When the air car stops, Logan Jessica and Francis get out for … plot reason? Logan makes his move and knocks the blaster out of Francis’ hands. Francis does some hunched over, Kirk-Fu moves and manages to regain his gun. Francis says they are going to wait. For what, we aren’t sure. However, we hear ominous music and cut twice to something that is lurking behind the pine trees …

As they wait by a campfire, they hear strange noises. More ominous pine tree music. Jessica gets to sleep inside the aircar and we finally get a fireside philosophical chat. Francis says Logan will be reprogrammed to talk about how danger the Outside really is to those helpless City of Domers (“Ok, Domer?”).

An indeterminate time later (yet still not full night, because production schedules). The Thing From Behind The Pine Trees comes forward. Both Sandmen, weary of their philosophical disputes, have fallen asleep. It ignores them and goes straight into the aircar,snaps some knockout drug under Jessica and we cut to commercial with even more dramatic music.

The next day, Francis is ready to head back to find Benjamin, but they haven’t even checked that Jessica is still there or may need to go to the bathroom. They are shocked, I tell you that she has vanished. They set out to track her and Logan insists Francis trusts him to search and not run away. Francis reminds him he knows all of Logan’s moves, which in my head canon is far more sexual.

They have a pleasant hike through the woods and even Francis would have to admit, it’s nice in the Outside. Logan saves Francis from a trap and asks for his blaster back. I think Francis is foolish, but Logan is quite persuasive. And has such a penetrating gaze …

REM and Benjamin find the other aircar. REM gauges the burned wood remnants and heat intensity of the campfire are at .015 (on the what … fake science scale?) and Francis and the others will be back soon. Riiiight.

Francis says it’s getting late (for what – brunch? They can’t have been walking more than 30 minutes) and wants to quit for the day. Logan says they have to keep going when suddenly a bunch of german shepherds start barking. Funny how a nuclear war hasn’t interfered with dog OR grasshopper genetics. A stranger with a laser rifle of astounding proportions says they’re on his land.

Poor Francis. In three episodes, he’s learned old age exists, Outside is quite delightful and Siri wasn’t the helpful soul Apple led us to believe. Now, more humans (and dogs) with nary a mutation on them, are living fulfilling lives outside the Dome.

The stranger, James Borden, has a sexy accent and says they can’t stay out there because there ARE mutants around and Jessica, like his own peeps, has been kidnapped as a slave. But now, if they team up, they can save everyone.

THIS is quite a leap. Sure, they are attractive young men with penetrating stares (and who knows what else may be penetrating) in fashion-forward Sandmen uniforms. But how on Earth does James Borden know they are up to the task of liberating slaves from the Mutants of the Swamp with him and his extra-long blaster rifle? Sounds like wishful thinking.

He has an electronic repulsion system (i.e. a force field fence) around his house that is one of those bits of 70s retro-futuristic technology I crave so hard.

Once inside, we are greeted by Mary Woronov in an AMAZING tiger-striped chiffon see-through caftan. This reads sexy, casual and perfect for showing off your father’s ancient weapons collection on a fireplace-less mantle. James is modeling an almost-matchy leopard-skin belt. The future, sadly is still not fur-friendly.

James and Francis are bonding over his big futuristic rifle. Meanwhile, Tiger Mary uses a huge garage door opener to open a room door and we see (waaait for it) … Jessica! Jessica lunges for a futuristic vase and Tiger Mary’s Garage Door Remote of Doom (GDROD) makes it vanish! Handy, that!

Tiger Mary explains James has hunted everything and now hunts a “different game.” Activating the GDROD, a panel opens with six ankhs on a velvet background. Holy Soylent Green is Runners!

Runners are boring prey, but now they are upgrading to hunt Sandmen! Jessica starts screaming but of course, it’s a soundproof room.

There’s a bizarre cut to REM sort of hobbling around then, back to John and his unwitting prey. All these post-apocalyptic 70s shows had a LOT of walking around footage. These shows would be 23 minutes if they edited out half the walking scenes.

Tricky Tiger Mary recorded Jessica’s scream and James tells the Sandmen to go thataway. A few steps later, Logan realizes it’s the same words over and over. I feel like Greg Evigan might be the only one who realizes he’s in a TV show.

James explains the rules – they have a 15 minute head start. If they kill John, they can go free (duh). If not, they are dead. Francis is ready to just head back to the air car. Logical, I have to say. Logan’s rationale that they’d never make it back to the car without John killing them is mighty weak.

There’s a lot of running and Francis  doubting they can beat James … As they fall into a trap, I have to agree with them. Or IS it a trap? It’s a strange metal room and the two enemies will have to work together to escape. Oh, tropes … I love thee.  Logan has lost his gun and tells Francis to blast footholes into the wall and they climb out.

Jessica doesn’t have much to do this episode … so she falls back on her best talent. She screams. Just kidding. She acts sick. Tiger Mary (now sporting a more businesslike grey tunic with leopard sleeves) heads into the room to see what’s wrong. Jessica steals the GDROD and runs outside right into REM.

Tiger Mary finds a miniature GDROD and escapes. She does NOT like to touch doors. She uses the GDROD to open everything. She has no problem loading a vintage weapon though.

REM and Jessica track Logan and Francis and Tiger Mary is tracking them and clearly nobody is tracking Benjamin. Even I’ve lost track. I assume he’s dead from lack of dialogue.

A cage springs up around Francis and Logan. I’m not sure if this fair in hunting, but this is the future. Logan suspects the trap isn’t real … that this is just an illusion. Francis shoots the projector Logan points out and they’re free! As Logan says, Outside is different from the City of Domes. James is impressed and switches his rifle setting to High Density. This is clearly a setting you don’t want to deal with, especially if you are content with your total mass divided your total volume.

Ironically enough … James and Tiger Mary have come around to the same rocks and set phasers to High Density. James kills Tiger Mary, who dies with sarcasm on her lips. I would gladly watch 23 episodes of Tiger Mary shooting runners.

James screams, his accent more pronounced with rage and scenery-chewing. I suspect he has turned up his acting setting to Maximum Density. Logan and Francis vocalize their plan so James will come after them. Just as James corners Logan, Francis blasts him.  Jessica and REM show up and Jessica GRABS FRANCIS’ BLASTER that he left on the ground to take James’ pulse. Logan was a bad Sandman, but Francis, you are just inept.

So of course, Logan has to prove even more inept. If he’d blast Francis’ head off once and for all … well, then the show would have to change format slightly, but come on! Instead, he GIVES FRANCIS HIS BLASTER BACK. Even REM is stunned.

However, Logan and Francis trade some Penetrating Stares © and now I KNOW there was some Sandman snogging back in the City of Domes.

At the aircars, poor Benjamin is released from inside the air car. He’s alive! REM has stolen an important component from their aircar, so Logan and friends will get a headstart in exchange for the component back. One last Penetrating Stare© and Logan, Jess and REM are off in their car. REM even stole Benjamin’s blaster, so now the status quo is preserved.

All in all, I give this a 3 out of five Sanctuary ankhs. No shirtlessness, but Tiger Mary was amazing.

See you next week for the next leg of Logan’s Run!