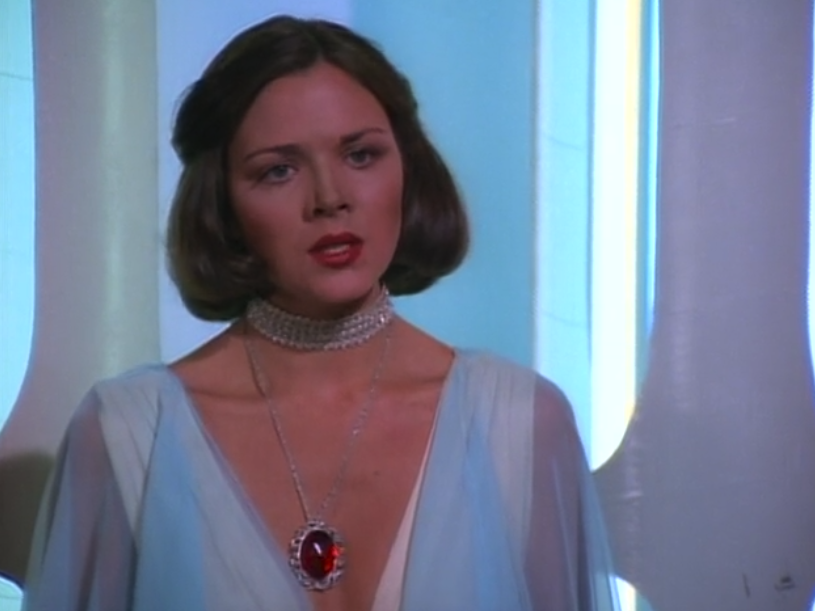 PEW PEW PEW! It’s that time again to leap into the future, put our best foot forward and start jogging along with Logan’s Run! This week with 100% more Kim Cattrall than ever before!

From the trailer, this looks like an expanded version of Original Series Star Trek’s “The Enemy Within” episode, only EVERYONE splits into good and evil version of themselves. Let’s find out what an Evil Sanctuary looks like, shall we?

We’re in the air car, and REM has a slight malfunction in his upper left extremity (what we humans call an “arm.” He pulls down the front of his tunic, which reveals a GIANT plate of switches and buttons. Jessica looks at it, and REM turns away embarrassed.

What’s more embarrassing is that Logan STILL hasn’t taken his shirt off since the pilot.

The scanner sees what could be a city. As they wonder what it is, the entire air car gets trapped by a net. Two strangers come out of the woods and aim a rocket launcher at the vehicle. The launcher goes off and doesn’t hit the car but some empty field behind them.

All of sudden – chaos! A bunch of horseback riders come out and shoot stun guns at a bunch of more roughly-dressed villagers.

These riders are attired in gray jumpsuits with salmon trim and what can only be described as plastic bee visors on their heads. I know I have no fashion sense, and now I see why. Shows like this made me think the future was UGLY (except for Tiger Mary’s print collection, of course).

The head rider refers to the ones they have stunned as “Castouts” and his name is Positive-14. I thought last week with the naming people after computer parts was wack. Pos-14 says something about being processed and REM plays along.

My first instinct would be to NOT go with these people. However, off they go, passing by brand NEW force field special effect. This show lacks bare chests, but it does give me a lot of 70s force field love.

They meet Rama One, who quickly realizes they have NOT been processed and warns them not to let the Patron find out. When they walk into the giant dining room, the Patron looks like the guy who tried to rocket launch them.

While that is surprising to Logan and his pals, I am floored that KIM CATTRELL is sitting next to the Patron! Yes folks, Samantha Jones herself, better known as Valeris from Star Trek 6 … is in LOGAN’S RUN! Now, I am hooked.

Like idiots, they tell the Patron of his double. Still, the Patron invites them to eat. At least Kim Catrell is not in the same ugly gray and salmon outfit the other Processed people are dressed in.

There is a long scene of food being served,  and REM not happy that he’ll have to eat. Kim jumps up and runs out, certainly bothered by REM’s bad joke. Kim runs to her mother (as we now shall know Kim, she is named Rama Two)  and cries that she can’t go on like they have been. She says she belongs with the Castouts and she loves the Patron, but is afraid she might snap and kill him.

This is my everyday life, Rama, honey. I love mankind, but I may snap and kill the next person who drives slower than 45 in the far-left lane. Rama One says Two has shown the Evil can be contained. Interesting.

Logan and REM bunk together and Jessica is in a different room. Maybe Logan and REM act more like a couple? The door locks behind them. They talk about the city’s obsession with perfection, while meanwhile, in the next room, Jessica gets a creepy-eyed visitor.

Now, had I been innocently brushing my hair and a creepy version of Dr. Joyce Brothers came along and said, “Look more closely at my giant ruby pendant, it surely won’t hypnotize you into doing my bidding,” I would have politely said, “No, thanks, I’m brushing my hair, but I’ll take that and use it on Logan who is just NOT showing enough skin in this show.”

Jessica being Jessica, she looks. Hypnotizing music plays, and she is ready for processing by the gray beekeepers who don’t take their helmets off indoors. She is put in the middle of what looks like a 3-person transporter room from Original Series Star Trek. Wow, they made no bones about stealing everything! Patron and Rama Two come in to watch. Rama One has disappeared and is never seen again.

After a long sequence of Button-Pushing®, it’s time to process, and I don’t mean our conflicted feelings about how soon this TV series will be cancelled. Suddenly, (well, about 75 second past suddenly) Jessica is split into two people.

The effects are pretty darn trippy. They must have used up all of a potential Season Two’s budget on this. It literally takes almost two full minutes to split her into two. No goatee is available for easy identification, however.

Castout Jessica is led outside and dumped past the force field. She runs, falls and then gets found by Castout-Patron, and they walk off happily. Processed Jessica goes to see Logan and REM and tries to convince them she loves it there and they should ALL stay.

Logan mentions Francis. We are now two episodes without him, and I miss his penetrating stares at Logan. Jessica blathers on, saying those people in the City of Domes probably loved Carousel, so, they should just let them do them.

Jessica unintentionally says the most profound line in six episodes – “Sanctuary lies within each of us … all we need is the key.”  Patron and Rama Two walk in and suggest they “see” the Processing Chamber.

The guards try to stun REM, and it’s as effective as Democratic voters unifying behind a single candidate. REM and Logan escape to the outside, reluctantly leaving Jessica behind. OR IS REM SICK OF HER TOO?

REM  neutralizes the force field with another cool new special effect. Sadly, they are only two steps past the force field before a gang of Castouts find them. Castout Jessica leads them into a trap. Logan and REM’s use of stun guns somehow makes the Castouts think they will all join forces and beat the Processed ones with their own weapons. I”m pretty sure that’s NOT how this will go down.

REM theorizes that the Processing splits people into two bodies and Logan says that’s impossible. In an episode filled with special effects and profundity, REM says (with his trademark “My dear Logan,” thrown in) , “The only things that are impossible are those which have not been mastered.”

Now I want to see what a Castout Logan would be like (as well as what he might wear … perhaps ripped shirts and a thong?) Rama Two is now revealed to be the Patron’s wife! Logan wonders why she ran off earlier. Some philosophizing about good and evil ensues.

Logan gets challenged to hand-to-hand combat, and I am all for it if it rips his shirt a little bit. Instead, he wants to talk about getting the Castouts and the Positives back together. Modok, the head Castout is not in favor and Castout Jessica is mean, calling REM a machine with a human face. Don’t forget to comment cruelly on his giant eyebrows, Evil Jessica!

Back in the city, Patron plans for a capture mission and plans to put the Castouts in the chamber again and divide them into nothingness! Ouch! Rama looks sad. Don’t worry, Kim Cattrell – you’ll move onto Porky’s and Star Trek soon.

In a rare night scene, the Positive Beekeepers head out with glow wands to catch Logan and the Castouts. REM gets he and Logan through the force field, then they break into the Positive’s compound.

Positive Jessica is happily pruning some flowers and Castout Jessica comes up behind her with a knife. I’ve heard of self-destruction but this is ridic! Logan and REM show up to scare her off. The group of Castouts sneaking around are suddenly surprised by alarms and lights. The  Positive beekeepers surround them in a trap.

Rama Two shows up to help Logan, Jessica and REM escape.  We cut back to Patron facing Modok. The Castouts are painfully aware of their evil nature and Modok chastises Patron for doing this to them. It’s a trope-filled speech, so I’m glad to get back to Rama Two and her blue chiffon escape garment.

She brings Logan and the others into a control room. She wants to be whole again, but her Castout self died during the process –  and (PLOT TWIST) she’s the evil one … the good one died! Somehow the Patron has NEVER realized his wife is the evil one? Rama’s plan is to merge with Good Jessica. Jessica refuse, even though she is being offered the chance to be (dun-dun-dun!) the Patroness!

Rama waxes poetic and comes up with the best line of the night –  “If only the Patron knew, the only truly evil thing … is the machine itself.” POIGNANCY IN A PEIGNOIR!

Rama frees Evil Jess and uses her hypno necklace to calm her. They go back to the Processing machine and I’m prepped for another 90 seconds of special effects. I totally hear Star Trek viewscreen beep!

The beekeepers arrive but can’t get in. The two Jessicas start to reunite. It’s definitely a quicker process, since there’s only five minutes left in the episode. As the Patron unlocks the door, Rama Two gets into the machine and tries to split herself into nothing. Patron shuts it off and he reveals he ALWAYS knew. He loves her. But she dies.

This, of COURSE, makes him upend their socio-political structure and everybody starts reuniting.

As they drive off, Jessica wonders if it all really happened, which, the answer is, yes, it happened to you fictional characters, but in our reality, we watched a lot of blinking lights and overacting. Logan jokes he saw a different side of her, and yet WE HAVEN’T SEEN ANY OTHER SIDES OF HIM LATELY!

I think this is why Democrats have problems … we watched too much TV as kids and now all think we can Captain Kirk our way into believing rigid, hypocritical and rigged systems can be torn down, if we simply moralize them into submission. Oh, well.

It’s a two out of five Sanctuary ankhs for me. Next week, we get halfway through the TV series and I am saddened that it’s potential may have peaked with Tiger Mary’s outfit.  See you next time!