“It’s a Mister Death or something.”

Heartbreakingly, my dad (gone just over a year now) warned me there would come a day when I was old enough to spend more time going to funerals than weddings. Two people I know – it may be romanticizing to call them friends, perhaps – but people I knew, worked with, partied with – both gone within the space of a week.

It is enough to make you climb back in bed and pull the covers over your head.

I AM DEATH, NOT TAXES. I TURN UP ONLY ONCE. 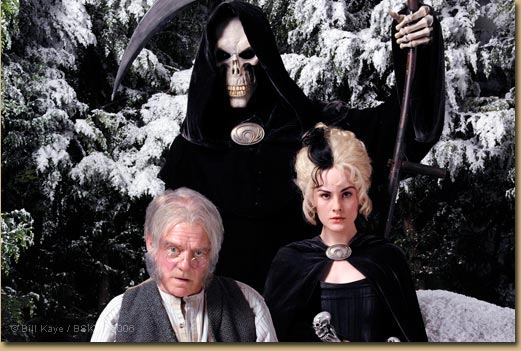 I fight the inevitability of age. I work out, dye my beard, believe that 50 IS the new 35 and I can keep on wearing Abercrombie & Fitch cargo shorts because they’re comfortable. I don’t drink, don’t smoke, and fill up on those positive affirmations that I will stay young and healthy forever.Until the day this year that a motorcycle fell on my foot, nearly shredding an already weakened tendon. It’s taken months to heal. And why? Age. That’s all, no way around it. 46 years inhabiting the same body and I simply can’t bounce back like an 18-year-old, no matter how low my body mass index is, or how much Egyptian Licorice tea I drink.

That injury rocked me. Rocks me still. Because it demands I address my aging and my mortality. And once you do that, every death near and far is the slap in the face of your limited time, the unseen tumor, the heart that could just stop beating. I grieve and we all grieve that “They were taken too soon!” And we pray to God, real or not, “Just don’t take me! I’m too young!”

“I’m Calista Flockheart. Who the hell do you think I am? I’m Death!” 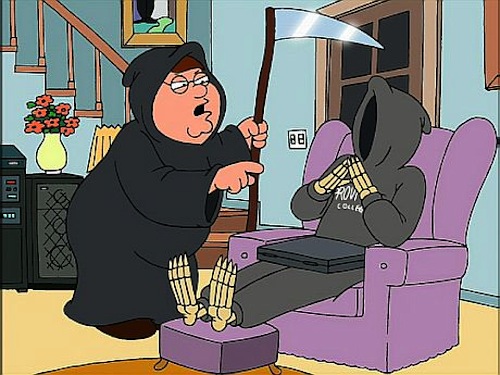 I want to believe in an afterlife. That the delicious, sweet moments we can know –  from sitting on a back porch watching a squirrel scrabble his way up an ivy-strangled trunk during a humid Southern summer twilight, to walking the red carpet for a movie premiere  you get invited to at the last minute – won’t be snatched away from us unfairly.

“When the first living thing existed, I was there waiting. When the last living thing dies, my job will be finished. I’ll put the chairs on the tables, turn out the lights, and lock the universe behind me as I leave.”

I want to believe the hours of laughter with friends and the crying of teething babies MEANS more than a few neuro-chemical synaptical flashes as we lose consciousness for the last time. That the taste of ice cream sliding down your throat and the smell of jasmin blooming at night can go on and on in another form. That there is an answer to the greatest question of all – Why is there something instead of nothing?

I can believe it as much as I want, but I won’t know till I get there.

THAT’S MORTALS FOR YOU, Death continued. THEY’VE ONLY GOT A FEW YEARS IN THIS WORLD AND THEY SPEND THEM ALL IN MAKING THINGS COMPLICATED FOR THEMSELVES.

Goodbye, Matt. Goodbye, Amy. Goodbye, Dad. Goodbye, Tim. I don’t know what happens next, here or there … but I’m going to try and get a laugh out of it.