I am a more than a little obsessed with this show.  It was crazy to hear some of my friends were, too. Since we live 7 miles from Mount Midoriyama (AKA the empty lot across from Mandalay Bay), a few years ago, we got audience tickets and saw some of the USA vs. The World filming.

I remain obsessed to this day, and here’s why …

10. Obvs, the shirtless guys. From Lance Pekus to that hot Russian bug exterminator we never saw again to my current fave, Grant McCartney – it is two hours of ab and pec heaven every week. 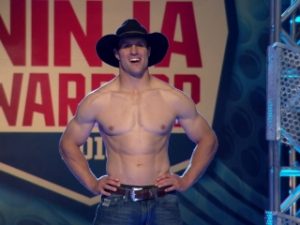 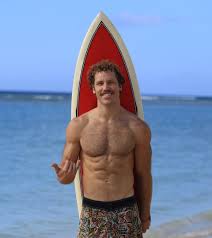 9. That could be Reasons #9-3, but there are others. One of them is, my insane curiosity about the walk-on line. Where do the walk-on contestants eat or shower?  What kind of jobs do they have (or not have_ to be able to sit in the walk-on line so long? I need to know!

8. Jessi Graff – SO a fan of this woman and the fact that she does stunts for Supergirl lets my comic and reality TV worlds collide beautifully. 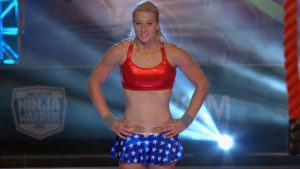 7. Kristine Leahy – When she interviews some contestants, she really shines. And of course, I wish I was down there interviewing Grant McCartney, too.

6. Where are all those T-shirts coming from? – They always cut to “lots of supporters” in the audience wearing t-shirts for whatever ninja is on stage. Five minutes later, different t-shirts! I know it’s TV magic, but I didn’t see T-shirt storage when I was there.

5. More celebrity editions – Red Nose Day was great, but I need to see a lot more celebs on the course. I’m looking at you, cast of

4. Sam Sann – I’m still sad he wasn’t the first to go all the way and now he seems to have injuries all the time, but he is still one of my heroes.

3. “American Ninja Warrior!”  – I could listen to Matt Iseman say this day in and day out.

2.  Just how hard is it?  – One day I will go to a ninja gym. I want to test out the warped wall and I really need to know how hard the floating steps are.

1. No one on Earth is happier than Akbar Gbaja-Biamila – That guy gets more excited about everything that happens almost every minute. I see you, Akbar!