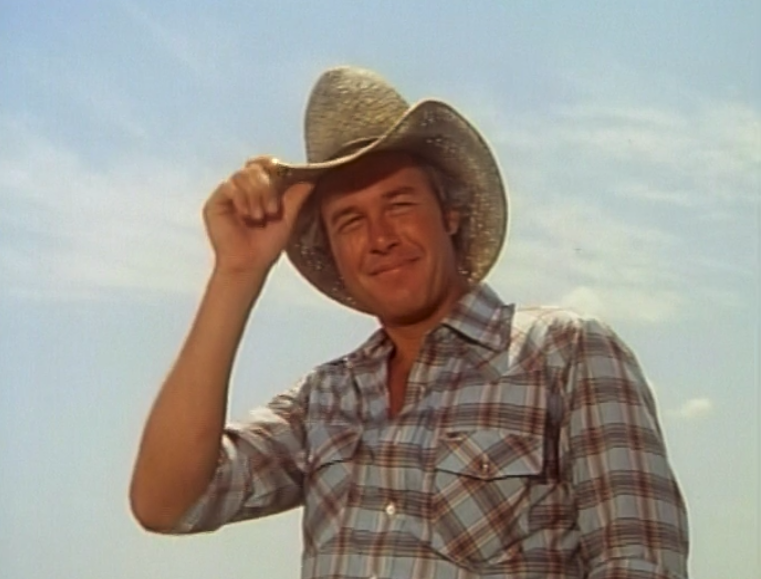 Oh, lawsy … Sue Ellen wants a baby and she’s ready to pay for one! Let’s jump in and see what’s happening on the ranch!

It’s Jock and Miss Ellie’s anniversary and as he opens a present there’s no card. J.R. tries to dig at Pam for forgetting the card. Pam demurely tells him it’s not from them. Sue Ellen says its from J.R, and her.  J.R. tries to cover by saying he didn’t recognize the wrapping paper and asks Sue Ellen where the card is.

With a look of complete death, she says under his breath it’s in the box. Ouch! No one can figure out what the gift is. Even the music  does a “womp-womp” sting. It’s an antique that poor, classier-than-the-Ewings Sue Ellen thought would look nice in the den.

Pam and Bobby, the GOOD children, got them a photo album filled with pictures of everyone growing up, including baby Lucy. This starts Jock off about how there hasn’t been a baby on Southfork in a long time. Sue Ellen claims she and J.R. are about to start a family “any day now.”  Jock says they’ve been planning that for seven years, so now we have to feel a little understanding of why Sue Ellen drinks so much.

Bobby and Pam pipe up that Pam went to the doctor and they can start having a baby, which we know … not going to happen. It stirs up Sue Ellen, though.  Bobby cracks an innuendo and shocks Miss Ellie. She gives her version of a “Get off my lawn” rant, which is adorable.

It’s super dark in the drinking room, so when we cut to Bobby and Pam’s room, it’s like a strobe going off. Pam doesn’t want a kid until they’re ready. Bobby presses the issue and Pam admits that Liz offered her a job. Bobby doesn’t understand why she wants a job, but she says she thinks Sue Ellen would disappear in a puff of smoke if J.R. didn’t exist. More like a puff of martini fumes.  She doesn’t want to be another Sue Ellen, so Bobby, for the love of all your cattle-riding ancestors, listen to her!

Bobby teases her that she can go to work on the ranch, but this discussion is far less misogynist than it’s been in prior episodes or will be in the future. Meanwhile, Sue Ellen gets tipsy and puts on some perfume. She tries to seduce J.R. He’s not interested and Sue Ellen tries to scare him that Pam will have a whole flock before they do.

Sue Ellen then tries to get J.R. to go get a test to see if he’s (ahem) virile. Sue Ellen does some seductressin’ and J.R. says he’s told her about THAT kind of behavior. He gets up and leaves and she screams “You can’t keep running out on me!”

If ONLY Dusty Farlow wasn’t currently trapped in the world of Logan’s Run!

She follows him out, yelling she needs something to hold onto. In one of his coldest lines ever, he says, “All right darlin –  I’ll buy you a puppy.”

J.R. almost slams into Ray’s truck, and I don’t know why he’s up at the house so late. He asks if she’s okay and she starts flirting with Ray! OMG he looks like he might take her up on it! They kiss and we go to commercial!

The next morning, Ray gallops up to the house and Sue Ellen gets out of the pool. He tips her hat at her and smirks. OMG, they did it! Ray calls her Sue Ellen and she snaps back with a “Mrs. Ewing,” and gives him a “I don’t know what you’re talkin’ about.”

I don’t care if they disavow this from now ‘til the end of time … Ray and Sue Ellen did it!

Miss Ellie comes out to water the plants, because they have no gardeners. She sees Sue Ellen has a sad, and says  she and Jock had problems, but they all ended when they had J.R..

Now. Miss Ellie, I love you and try to follow your life wisdom. But your problems pretty much STARTED when you had J.R.. Also, breeding is not a woman’s only function. She follows up this poor advice with “There’s other ways to have a baby.”

Before I can suggest alien implantation, Sue Ellen guesses she’s talking about adoption. Miss Ellie says do what you need to, and she’ll deal with Jock.

At the adoption agency, they ask Sue Ellen, rather indelicately, what type of baby she wants. Are we in a genetic engineering facility? Or do rich people get to say, “I’ll have a white straight male with all the advantages, please.”

Sue Ellen wants a newborn. They mention abortion and the pill as being reasons for why newborns aren’t readily available and is DALLAS some sort of right-to-life conspiracy? Is my whole life a lie?? The adoption woman is still filling quotas from 1975. Darn these 70s feminists for messing with Sue Ellen’s happiness!

She knows J.R. ain’t gonna do any older child, so she leaves. The agent opens one of the crazy old flip-rolodexes that my dad used to have. She calls a black market baby-seller. We are going down a shady, shady path!

Pam takes the car to meet Liz. Bobby thought he’d “settled” this last night when he mansplained all this. Pam isn’t having it and drives off. In his car.

We cut to Cliff Barnes, chatting with a crony about his upcoming announcement as his run for state Senate. This will be important later, but for now, they see Sue Ellen at a bar. Cliff’s crony says he has a meeting with her and Cliff wonders why.

They cross over to her and I realize this is the first time Cliff and Sue Ellen have met! They flirt and his buddy, Buzz tells him to get lost. Sue Ellen is suspicious of why another man was there, but she still goes into the restaurant with Buzz, who says he’s drawn up the necessary papers.

He explains that buying a baby is illegal but rich people can get what they want (Duh) from girls that don’t want to deal with agencies. It’ll be $15,000 for expenses.

I know its 2020 now, but even in 70s money, that seems pretty reasonable. Sue Ellen is told about a girl seven months pregnant and Sue Ellen wants to meet her. Oh, this is going to be stereotypical!

Sue Ellen drives her station wagon to an apartment complex, which I’m sure is causing her agita. She knocks on Apartment #4 and a girl answers the door and lets this crazy rich woman in. Rita, the pregnant girl, asks why Sue Ellen doesn’t have her own money. Rita asks for a cigarette! OMG now I am wondering if my mom smoked while she was carrying me. This would explain some things.

Rita dismisses Sue Ellen, who remains nice and civil. Sue Ellen offers to buy her groceries and a six pack of root beer. And a new apartment. WOW. WOW. WOW. Sue Ellen, I’ll have a baby for you!

Bobby heads up from working on the ranch and chats with Jock. Jock asks if he has a problem with Pam. Then Miss Ellie starts in on him. He finally comes clean and tells them she went to work.

Jock says he doesn’t see anything wrong with staying home and having babies. OMG we are regressing faster and faster. Jock thinks next she’ll be wanting him to go into construction. Miss Ellie has little to say about the women’s lib movement going on in her ranch.

Sue Ellen has gotten Rita a spiffy new apartment and Sue Ellen sees a photo of the girl in a beauty pageant. They bond over their experiences and Sue Ellen talks about how she made Miss Texas but she didn’t get to the finals of Miss America. BACKSTORY!

Pam heads to The Store. She tells Liz she and Bobby have “resolved” their issues but we know that’s a flat-out lie. Pam says they fight because their individuals. Hmmmm, I say, hmmm.

Pam runs into Sue Ellen buying “baby shower gifts.” Of course, Rita shows up and Pam acts like she’s not suspicious. But of course, now Rita feels like dirt.

Ray drives up to the house and he’s shirtless and Lucy tries to convince him to get in the pool. J.R. appears and tells Lucy she should put clothes on around the help. She’s trying to get a tan, J.R.! What do you want her to do, wear a turtleneck (line gleefully paraphrased from the show!).

Rita confronts Sue Ellen about her being embarrassed about her in front of Pam, but Sue Ellen explains she’s going to waltz into Southfork with a baby and J.R. won’t be able to do anything about it. Back at the ranch, J.R. sets a private investigator into action.

The music in this episode feels different –  we’re getting a lot of proto-Yanni stuff as well as the more dramatic commercial outros. We come back to Pam swimming and she answers the phone. Rita mistakes her for Sue Ellen and asks what hospital she wants to baby born in … after all, she’s paying for it. Busted!

Pam goes to talk to Sue Ellen. Pam’s wearing a sheer sheer sheer caftan over her swimsuit. She tells Sue Ellen she knows what’s going on and Sue Ellen asks if she needs advice from a shopgirl. Ya burnt, Pam!

Sue Ellen confesses she can’t wait three years. Pam says it isn’t a contest but HELL YES IT IS.

Pam, if you don’t know family politics by now, you may end up needing that job at The Store.

Sue Ellen races to Rita’s apartment with more gifts and walks in to …. an empty apartment. The door opens and in walks Safari-action J.R.! He’s put Rita on a bus to California … where you dispose of those liberal baby-havers!  Sue Ellen stalks off back to Southfork.

Everyone but Bobby is out at the pool (I think Lucy actually lived there most days – I know I would) and Sue Ellen screams accusations at Pam. She runs off to her room, crying and saying Pam can have all of it. Not that it’s Sue Ellens’ to give, but she’s upset.

J.R. comes home and sees her packing. Sue Ellen says she’s leaving. They have a massive fight. J.R. claims to want a baby, but she spits out that he hasn’t touched her in months. She slaps him and then he throws her on the bed and forces himself on her. She asks if this is what turns him on, having sex with someone who doesn’t want him … but by the end, she begins to respond.

This is a terrible abuse of her agency, as bad as the would-be rapists in Season One, and I’d forgotten about this episode. Ugh. J.R. was vile and so were many many men at the time. And of course, still now, sadly.

We end on a contrasting note. Bobby brings Pam outside and won’t let her see something. When they get to the driveway, she opens her eyes and she has a new car. Since she has a job, she’s gonna need a car. At least Bobby has  turned a corner.

Two out of five Ewing license plates for me. The trouble with recapping 70s dramas is, things like her continued loss of agency are so prevalent. Husbands forcing themselves on their wives wasn’t even a trope, it was just standard procedure. Ick.  Next week, Pam’s FIRST husband returns! Join us at the Ranch, won’t you!