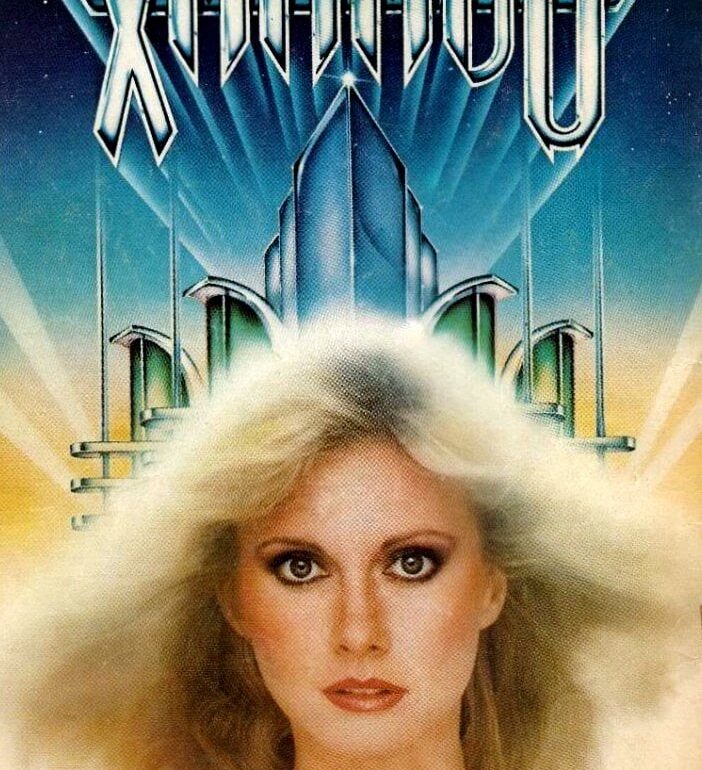 I don’t obsess about Xanadu like I used to.

Over the years, it pops up and I get a twinge of nostalgia. Songs or dialogue hurtle me back to  the pimple-faced, gay 15-year-old, who meticulously cut out the silhouette of Olivia Newton-John from the back of the soundtrack, and taped inside my locker door.

Or breaking off from my classmates during spring break in Myrtle Beach to throw on some parachute pants and a Members Only jacket, and visit a bar called Xanadu where my fake ID got my inside for two drinks, but no roller-skating shows.  Or getting sweaty and dirty at rugby practice on chilly evenings outside at Pan-Pacific Park, where the auditorium was that they used as the exterior of the Xanadu nightclub. Or commandeered the big conference room at work one day, where some coworkers and I watched Xanadu (and I vaguely remember SOMEONE getting on the table and dancing) for lunch.

Objectively, the movie is … not good. I’m sure everyone assumed that ONJ’s next film after the phenomenon that was Grease would be at least … serviceable.  It fails on so many levels. Script. Camera angles. Choreography. Acting. Costumes (well, it succeeds on one level, at least).

And yet, I still love it unironically. As a budding gay, I saw it in the theater with my best friend, Brian, 13 times. THIRTEEN! The only other film I’ve seen on the big screen that much is Star Trek: The Motion Picture, which tells you all you need to know about my cinematic tastes.

It wasn’t the plot or even the characters I responded to. Mainly it was the music, like a 90-minute music video. But it was more.

It was the magic. Not the magic of the (admittedly lame) special effects. No, it was  the magic of the message they kept repeating. A message hammered home as subtly as a drag queen trying to make a catch phrase trend. Dreams don’t die. Dreams could come true.

If a Greek muse from antiquity could show up in the 1940s and inspire a big band member to fall in true love and open a nightclub, why not a struggling album cover artist in the 1980s? Why not me in the 2000’s when I got old enough?

Only I didn’t want to start a nightclub. I wanted to sing. I wanted to dance. And I wanted to soar up in the sky, surrounded by that computer-generated aura that Brian and I dubbed “Xanadu Overdrive.”  Physics made that part of it unlikely, because as much as I love the fantastic … science still rules my heart. And furtive auditions for local and national shows (Oh, yes … I even tried out for Nashville Star, the low-budget country cousin to American Idol. #shamefulthirst) showed me that was NOT the direction I would be heading.

Still, making dreams reality became the thematic undercurrent of my life. Yes, at the end of the movie, Kira had to go back to Olympus … but she left behind an avatar, the cocktail waitress that the swelling end score promised would be Sonny Malone’s true love. DREAMS COME TRUE, somehow, some way.

Forty years later, I cling to that proposition. I’ve been extra lucky. I’ve achieved a lot. I still have a lot more dreams, and frankly … I’ve run a bit dry, creatively in the last months. I struggle to start or finish projects. Imagining things to fruition seems fuzzy. Even with the words of Gene Kelly ringing in my ears as consistently as tinnitus, “Dreams don’t die. We … we kill them!”, I feel uninspired. Drained. Unsettled.

So today, I’ll re-watch Xanadu, for the first time in about a decade. It won’t be a magic pill that recharges me for the rest of my life. But maybe it will remind me. Dreams don’t die. Maybe they can change. Get bigger, smaller, whatever.

Maybe I just need to be that 15-year-old kid at the Colony Shopping theater seeing it for the 12th time, giant tub of oily popcorn in my lap, comfortably knowing everything will be all right by the end.

Or maybe I just need some roller skates.