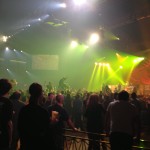 1. Where does the guy with his face covered in tattoos work? Probably not at an accounting firm.

2. What are they really doing backstage while the opening act is on?

3. Can that drink on the ledge of the balcony fall on me?

5. I have never even heard a Misfits song.

6. Under what circumstances would my mother have let me go to a heavy metal concert when I was 10? (upon Hell freezing over.)

7. Is that guy in a wheelchair being crowdsurfed?

9. Security guards, like bartenders, are either super hot, or super not.

10. Should I at least Google Misfits or go on iTunes to see if I like them*?

11. The trend of buffed-up punk and metal singers is A-OK with me.

12. Moshing, from a distance looks like skipping. Dangerous and violent skipping … but skipping.

14.Who has the final say in choosing the opening act?

15. Who would I want to give me a private concert?

16. Probably Stevie Nicks, but a Tina Turner concert would probably be more fun.

18. His girlfriend is even drunker.

20. If I lean against the railing this way, maybe the circulation to my feet will start back up.

22. Can my organs explode from too much bass?

23. The guy in the wheelchair is on now stage. I would hope they are going to party with him later.**

24. Those two bros are hugging a little bit too much for just being drunk at a metal show. Their girlfriends might want to intervene.

25. I miss 80s metal videos – I was so hoping the future was going to look like Mad Max costumes and gel lighting over the sun.

26. Encores are such bullshit. We KNOW you’re coming back and playing your hit song.

27. So hurry it up. It’s a school night and some of us need to take out their contacts.

28. My own body image issues prevent me from dressing that way, but I admire metal fans’ commitment to dressing the part. And to eyeliner.

29. Okay – it’s cliche now, but still cool to pull the little kids up on stage to rock out during the encore.

30. And … scene! To the car before the parking lot gets crowded! Hurry!

Volbeat. put on a great show and I’m indebted to my husband for rekindling my interest in metal.

Now, if he would just wear the Mad Max-inspired clothes I bought and shredded for him …

*Ultimately, I decided not to. Like the Blurred Lines song, I’ll let them come to me when the universe feels I’m ready.

**Apparently they didn’t, and he came back into the audience and everyone crowded around him.  Later, when the lead singer asked for girls to get on their guys’ shoulders, the crowd picked up wheelchair guy again.