Oohh, this episode is a bit TOO relevant. I wonder if I should have waited until November for this one! It’s time for Cliff Barnes to try his hand at politics and get knocked down by the Ewings when a secret from his past comes back to haunt him. Let’s dive back into the Coronavirus-free 1970s and enjoy this week’s DALLAS recap!

Jock, Bobby and J.R. (which, until you type it a hundred times, you don’t realize how irritating a name like that is in print – what did all the media do in the early 80s before word processors and cut and paste?) are in the office with a bunch of good ol’ boys discussing who to support against Cliff in the upcoming election.

They ditch one candidate because he had a highly-publicized alimony suit three years ago. That could take somebody down in the 70s? I feel like that was mild even then, but I was only 11 at the time. The good ol’ fat cats come up with Martin Cole, who’s A) a churchgoer and B) is against gun control. OMG, people … I think the Ewings are Republicans! Jock puts Bobby in charge of raising money for Cole.

One fat cat snidely remarks that will cause trouble at home for Bobby. Jock essentially says Bobby can handle his wife and that he’s a Ewing first and foremost. Jock remains problematic and not just for those damn bolo ties.

At Cliff’s campaign HQ, someone wants to give Cliff a ton of money … but they represent someone shady. Surprise –  it’s Big Oil! As Cliff’s buddy points out, the donation could probably wipe out the national debt.

This is sobering. Literally nothing has changed in politics since Dallas first aired. Cliff refuses on principal, which I suspect never happens today, so perhaps one thing has changed.

Pam comes to visit and have lunch –  and Cliff busts out a bagged lunch. He can’t let Pam pay? She’s rich! Cliff wants her to sniff out who the Ewings are backing and Pam says she’d tell him … unless Bobby asked her not to.

Cliff needs money and asks Pam to put on a fashion show to raise money. She’s hesitant … she’s been getting flak from the Ewings for helping him. She (kind of dumbly) thought she could keep a low profile.  Reluctantly, she agrees, knowing there’ll be hell to pay.

Before dinner, J.R. tout how Bobby’s been successfully raising money for Cole. Pam is working on her fashion show and Sue Ellen throws some serious shade, saying what a “novel idea.” The fact that the show is to raise cash for Cliff stuns the family, though Bobby takes it well. Jock and J.R. are snarky, causing Pam to stalk off. Lucy manages her timing perfectly as she walks in, smirks, and says it looks like dinner time.

I have to say, Pam handled the whole thing well. She stood up to Jock, saying she’d have preferred to discuss things with Bobby alone, first.

However, once they do get alone, the sparks fly. Bobby is the epitome of straight white male privilege. Pam is proud to be a “knee-jerk reactionary” (perhaps we didn’t say liberals on TV in the late 70s … I wasn’t all that woke then) like her brother. She predicts if the Ewings aren’t stopped they will (insert maniacal laughter here) RULE THE WORLD!

They calm down and Bobby says they didn’t choose their sides they were born into them. DEEP!

Sue Ellen is hosting a Daughters of the Alamo debate between Cliff and Martin Cole. Some Jesus talk is invoked, which I guess is showing how non-corrupt Cole is.

Sue Ellen, during refreshments, catches Cliff’s eye. Political flirting begins! She claims she’s not into politics but she IS into some politicians! Cole has “limited” appeal to her. Meow!! Cliff’s handler says their conversation is causing more stir than gun control AND the ERA together. Whoo-hoo, Texas!

Old white women glare at Sue Ellen. She talks louder to cover her tracks over a conversation that lasted literally 30 seconds, then walks off.

At the office, J.R. and Jock are upset that Barnes is gaining a percentage point a day. Jock suggests Cole get a new speechwriter –  the current one is putting people to sleep. He also tells Cole to stop dressing in (and I quote) “those tired old man’s clothes.” Now I want Jock judging Project Runway!

They also decide to buy more TV time and find a Madison Avenue-type media specialist like Cliff has. Jock and J.R. know Cole can’t win, so they start trying to find some dirt on Cliff. Jock leaves saying J.R. needs to find the body in the closet and J.R. responds, “If I can’t find it, I’ll put it there.” THIS IS WHY I LOVE THIS SHOW.

At dinner, the tension builds as J.R. insinuates Cliff’s media specialist, his former college roommate, is helping Cliff for free because he’s well … you know. Lucy pipes up and can’t believe that the “gorgeous” Cliff Barnes is … you know. He is over 30 and unmarried, you know. Miss Ellie doesn’t like the turn the conversation is taking.

This is how we discussed gay rumors in the 1970s, folks … you know.

Pam, incensed, talks about the girl Cliff loved in New York that he never got over. Whoops! J.R. played you too well this time, Pamela! The girl died and now J.R. and Jock know there’s some body in that closet –  and it’s not “you know”!

J.R. hires a private investigator while Pam broods outside on the porch. Bobby comes out to make up with her. Pam can’t tell Bobby why Cliff’s fiancée died, even though he tells her the tips of her ears turn red when she lies.

Before you know it, the PI has given J.R. the dirt. They are ready to pounce, since Cliff has apparently broken the cardinal rule of politics –  never get caught in bed with a live man or a dead woman. Yee-haw, homophobia and sexism all at once!

At the fashion show, Pam and her crew are hard at work fashioning, when they are ambushed by a TV crew. The reporter says Cliff is implicated in the abortion-related death of his fiancée ten years ago. I’m a tad confused on how he can be implicated.

The models on the stage all glare at Cliff like he’s some sort of puppy-killer. The judgement in this room went up about 800% in 30 seconds. Pam looks stricken. Pam tries to tell Cliff it was her fault, but he won’t listen.

The campaign headquarters looks grim, as Cliff tells his crew his side of the story. His fiancée didn’t want a baby and abortion was illegal at the time and they couldn’t go to a hospital. They found “someone” and she died while having the abortion.

Now. I try to keep politics out of these recaps – but HOLY MOCHA JESUS people! Is this what we want to go back to? Let’s think about this in November!

Okay. Sorry. Cliff kept it a secret due to his fiancée’s family’s religious beliefs. Technically then abortion was still illegal, so he did commit a crime. Cliff breaks down and tells his staff to tell callers the truth – he loved the fiancée and did what she wanted.

I think he realizes Pam was the only one who could have led them to the story. Cliff takes a walk and Sue Ellen is parked outside his headquarters. She followed an “impulse” to come visit. Sue Ellen gives him another clue as to who told J.R.

What must be close to simultaneously, Pam stalks up to Ewing Oil to yell at J.R. and Jock. Jock throws up his hands and says “Politics is politics.” She says they are going to be pay for what they did using their own rules and J.R. wisely says she’ll only use them to protect her own interests.

Pam goes to Cliff’s apartment. It’s awkward. She admits it “slipped out” about the abortion. He can’t believe she let it “slip out,” that she did it to help Bobby. It’s an ugly, loud fight and he says “If you live with vipers, you become a viper.” Harsh, but true.

Pam broods in her room. Bobby comes in sympathetically, but defends the politics of it. Cliff made a mistake and J.R. exploited it. Bobby is decent, if a little too much on the side of his potentially world-ruling family.

Election night at Southfork is ugly. I have to applaud Pam for being able to even sit there while a ton of guests are in the drawing room whooping and hollering. Unexpectedly, Sue Ellen comes over to “not gloat.” She’s actually sorry Cliff lost, though of course, Pam doesn’t know there is a flirtstorm brewing between Sue Ellen and her brother.

Finally, Bobby comes over to give Pam some moral support. She says Cliff won’t believe she didn’t do it on purpose. Bobby insists they go find Cliff and straighten things out. Pam and Bobby go to the campaign headquarters. Cliff doesn’t want to talk to them, but Bobby and Pam outlogic him in a manner Captain Kirk would be proud of. Cliff forgives Pam but doesn’t want to go get a drink. He wants to do some thinking. What, pray tell could he be thinking?

Capiche Moment: Cliff calls his media specialist to call that Big Oil guy and see how much money they can get for the next campaign!

Overall, three out of five Sue Ellen martinis. Not enough of J.R., but when he was onscreen (and not in that ridic safari outfit) he was the epitome of J.R. ness.

Next week, the drama amps up as Bobby and J.R. go down in a plane crash, Sue Ellen and Lucy fight over who’ll get Southfork (Gary, d’uh) and Miss Ellie tries to keep the news about her sons from Jock so he won’t heart attack again. Join us, won’t you? 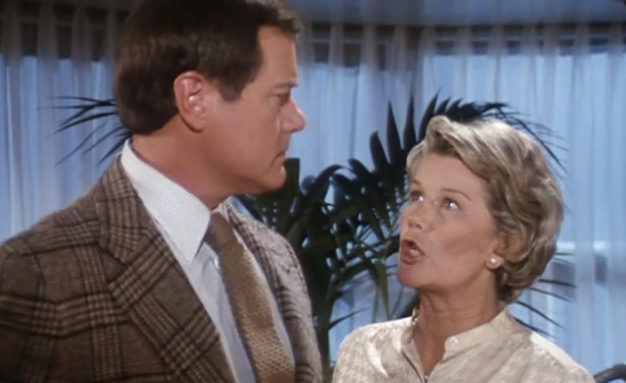 Is Jock having an affair? Did J.R. forge his daddy’s will? Are we about to see what’s REALLY in the Red File, […] 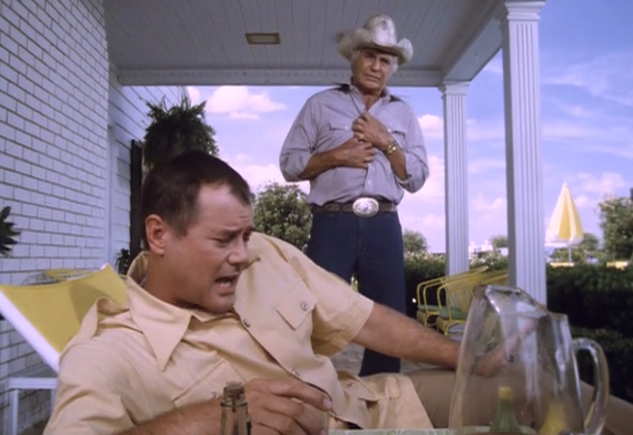 It’s the Jock has a heart attack episode! For me, this was when Dallas truly started sinking its hooks into me. I […] 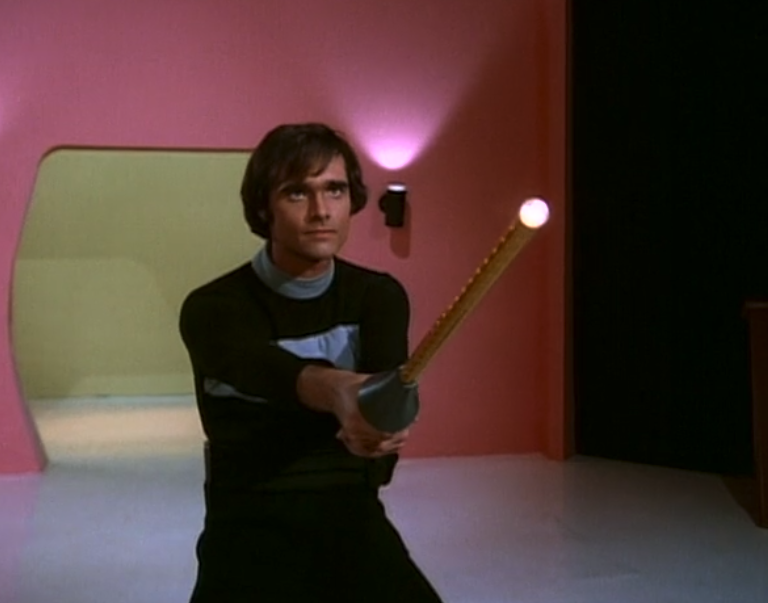 Oh, what a long and non-shirtless trip it’s been! I’ve so enjoyed plunging into the chiffon-filled world of the future. It’s fascinating […] 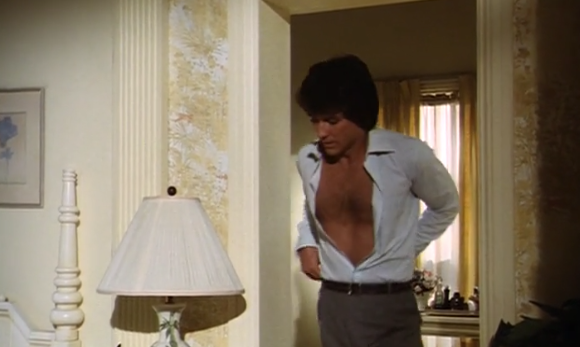 Julie’s dead, Cliff is in jail, but we still don’t have access to what Julie hid somewhere … what has she done […]